My old friend Marty Rees has surfaced again, this time courtesy of the Torygraph. He is still banging on about the possibilities of extra-terrestrial life. This time he says it might be staring you in the face.
Here is a picture of old Mart. 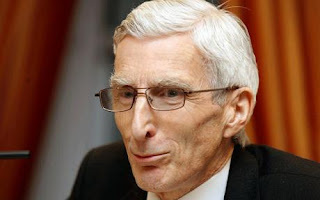 What do you think?
In order to explain why we have never met anyone called Neville from one of the planets in Cassiopeia, Martin suggests that Neville may have evolved in a form that does not conform to our laws of mathematics, or our technology. He says “… it could be there as aspects of reality that are beyond the capacity of our brains.” As one who finds the laws of physics beyond the capacity of my brain, or at least beyond the boundaries of common sense, I find this a little disconcerting. Is the man seriously suggesting that the human intellect is limited, and it may not be possible for us ever to truly understand existence? God, in an interview on another page of the Torygraph which I seem to have mislaid, said of Reesy “What a dumbass.”
Mr Rees is not done yet: ‘He told Prospect magazine that improved telescopes made the chance of finding extra-terrestrial life “better than ever”.’
He has not considered the possibility that such nosiness will do little apart from piss off our neighbours. I cannot be the only one whose pursuit of knowledge with the aid of a telescope has caused my neighbours to display ire. Even dear Pam, who leaves her curtains open and cavorts in the most inappropriate manner, has set the dogs on me and my binoculars more than once.
A further speculator referred to in the same article is called Frank Drake. If he had wanted to be taken seriously, he should not have taken the name of a famous pirate and slave-trader, in my view.
Frank says that the switch from analogue to digital TV broadcasting means that we are transmitting less to the cosmos. He is obviously not thinking clearly. There is nothing likely to encourage visitors more than their wanting to know whether Ena Sharples finally managed to marry Albert Tatlock, is there?
I will attempt to save a recording of the splendid Lions v Chiefs match from last weekend for them, together with the collected writings of Padre East, and, if I ever managed to afford a powerful zoom lens, those photographs of Pam.
at 2/22/2010 04:18:00 pm

I thought you were saying that Charles Messier, the late French astronomer, had an objection to Mr Rees. Then I thought that was a bit unlikely. Now I am vacillating uncomfortably. Please advise.

I read that article too.

There's no need to save my blog archives for them. Mr Xcylxzflug, from Arcturus Minor, pops round for a cuppa and a chat every other Friday, and picks up a copy, along with the lastest details about your medical 'problem'.

I'm not liking the thought of Z vacillating uncomfortably - please help her out, before being in your comment column buggers up her hip

otherwise, I've often thought that there's no reason for us to assume that all life is carbon-based and evolved to the same time-span as this planet

I don't have physics O-Level, by the way (as you can probably tell)

I feel it is only a matter of time before Steve Jobs introduces the iScope.
Rog will buy one - then we'll know the truth.

Tell me more of this delightful little theory of yours that "the human intellect is limited, and it may not be possible for us ever to truly understand existence?"

You might well appreciate how delightfully antiquated your notions appear to those of us living next door to the zenith of the human experience.

Fortunately for us Western Hemispherians, everything aboot LIFE is so splendidly laid out in bite-size easy to recite chunks, that even a common idiot can easily figure it all out in a day or two..
Ya gotta luv it?

Vicus dear, remind me to wall over my windows from now on. :)

Z. Monsieur Messier would not be alone in his objection. However, there is no need for you to take on so. Gentle wavering is acceptable, but uncomfortable vacillating is to be eschewed. Settle down and enjoy a nice George Clooney movie.
Dave. I am so pleased that you are extending your famed hospitality to our brothers in the universe. I am not surprised they choose you as their first contact.
ILTV. I have done my best for Z. There is no need for you to get concerned, the laws of physics are a complete sham. You did well not to study them.
Kaz. Yes.
Donn. God does not understand existence - he just makes it up as he goes along. What chance do we stand? Of course, God is far too busy carving images of St Thomas on lumps of Wisconsin cheese in order to pay proper attention to ordering creation. He tells me that he prefers confusing baptists to providing answers to philosophical problems. I don't blame him. I just wish he would stop sodding about with facebook.
Pamela. I fear that it is too late for you. Have you not checked youtube lately?

The only comment I can make is: Is that his real nose? The guy in the picture, I mean.