http://toastyzone.blogspot.com/
About bloody time too.

They are very rigorous - the judging exams

It has occurred to me that I am perhaps the only blogger in the 218 billion out there who has no idea how to pronounce his own name.

Perhaps some scholar of Latin would care to show off like a big girl’s blouse impress us with their immense knowledge and tell us whether the ‘i’ in Vicus is pronounced as in ‘git’ or as in ‘visa’. I don’t believe it should be ‘i’ as in ‘shite’.

And is the v pronounced as v or w?

There will be a prize for the 500th comment. (Anyone posting consecutive comments will be disqualified).

Goodbye and thanks for all the fission

I had mixed feelings when my pals at the BBC reported that there was a problem with physics in schools.

The initial headline indicated that there may soon be a danger of physics dying out in our centres of education. I did not take this literally, and did not take it to mean that New Labour had meddled even further than it usually does, and repealed the law of gravity, and Curie’s law in schools.

Their article clarified this a little, by referring to a “shortage of physics teacher”. I took this to be a reference to a lack of quantity rather than stature, having read the entire article. This makes sense. When I was a lad, none of my physics teachers seemed either inordinately tall or short. The only characteristic they had in common was their continued belief in the absurd pronouncements they made during lessons. I am convinced that physics is little more than modernised Alchemy, and more of a mythology than a science. The complex rules of English syntax make more sense to me.

I am glad that this ridiculous belief system is dying out.

It may seem a little presumptuous of me to describe some of the greatest thinkers and scientists of this and former ages as misguided practitioners of an arcane mysticism, but, mark my words, students far in the future will fall about laughing at the bizarre understanding of the universe demonstrated by 21st century physicists, while marvelling and being awestruck by the sagacity and wit of Kaliyuga Kronicles.

I was surprised to hear on Radio 5 just now a correspondent report that “FIFA wants soccer to be seen as a sport taking drugs seriously”. On reflection, I suppose that he meant that FIFA wants to soccer to be seen as a sport that views the taking of drugs seriously. I regret that my days of drug-taking, whether serious or frivolous are long past, unless one counts occasional aspirin and caffeine, so I am in no position to offer advice. I have to say that being frivolous about drugs is probably closer to my position, although I would not want to be too close to a drug-crazed John Motson, unless the drug was a very efficient sedative.

I accept no responsibility for the contents of this post

I have found a wonderful new internet resource, but am reluctant to recommend it.

It cuts down on the time spent “poncing about on the internet”, as some have unkindly described the time I spend broadening my perspective by investigating the offerings of humanity, or the time spent “doing puja at my mandir” as Mrs S. describes it, not without a little bitterness.

Google reader (reader.google.com) combines selected RSS feeds and puts them all in a single list. I have to confess to a certain nervousness in using it, due to anxiety about what to do with all of the time that it saves. Currently, I am pretending that it is not entirely reliable, and still checking each page individually. I will not be able to keep up this deceit for long, and may have to engage in the alternative universe out there. I trust that your thoughts are with me.

Next week, Minder in Mandarin

I was delighted to see that is still having a colonial influence on the sub-continent. The other evening it was my pleasure to see the Indian version of “Who wants to be a greedy bastard”, which is called “2 Crorepati”. Let me expand on this.

The prize for getting the first question right in the Indian version is £12.50, rather feeble compared to the £100 offered by our pal Tarrant, but the 2 Crorepati of the title does not refer to a dish seldom seen at your local tandoori, but rather to an amount roughly equivalent to £2.5million. Thus far, to the best of my knowledge, no-one has won that amount, but someone won 1 crore rupees, something in excess of £1 million.

What was most interesting to me was to see my old friend Amitabh Bachchan hosting the programme. Amitabh is the most famous person in , with the possible exception of the sainted Sachin. It is possible that there are no other famous people in , and he has to perform all the duties which require fame, in the same way that Lata Mangeshkar is the only singer in , and has to sing all of the songs.

Amitabh, who always looked vaguely odd to me, now resembles Rasputin, in much the same way that Mr Pacino has done, but with more conviction. He also makes the mistake that Tazza never does of affecting to be knowledgeable, and comes unstuck as a result.

I commend it to those wishing to expand their knowledge of Hindi. I have learnt the following phrases, listed below with their English equivalent, after watching only part of one episode:

I expect that having only mildly criticised Mr Bachchan, I will get some abuse from his fans, should they be bothered to come over here. It’s a good job I didn’t say he was a talentless, third-rate actor who wouldn’t even get an audition for Crossroads then, isn’t it?

No, still nothing to write about here.

Concerned for the health and wellbeing of my readers, due to a recent lack of material here, I scan the competition, to see whether they are in danger of finding nothing to write about.

I am cheered that the online Torygraph has an article that begins with the heading: “Dave Stewart of the Eurythmics on his consuming passion for his G4 laptop”, and I immediately realise that all is well. I may be responsible for writing some total crap from time to time (pause for readers to shout out in disagreement), but there are very many unpleasant corners of human existence in which I will not be found. The only thing that intrigues me about the article mentioned above, is whether there is anyone – living, dead or Conservative – who is so bollock-numbingly bored as to contemplate reading it.

In the Independent, someone has written a 578 word article on vodka tonic. I suspect also that someone paid them to do it.

So, let us not get too despondent about Caroline, Watski and Toasty deciding to abandon their web journals, nor about Tom failing to find a new title this week. Those of us left can take some comfort from being further from the bottom of the barrel than our professional colleagues.

Hands across the sea 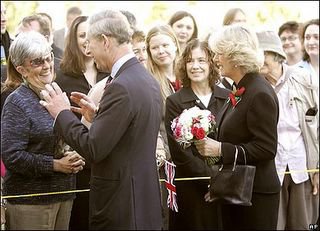 Charles has been very well briefed for this tour. Sadly, the information that tit grabbing is the state sport of Iowa proves to be somewhat misleading.

Another cheap and tasteless dig at the expense of Morons Reunited 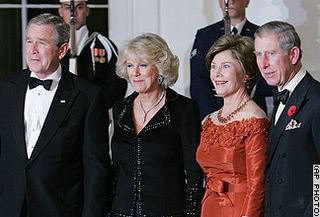 Laura is not sure whether the finger up her butt belongs to Charles or Camilla. George just hopes that whoever is squeezing his testicles washes their hands before lunch. 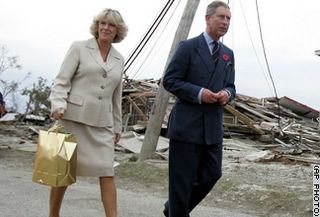 Despite my advice, Camilla cannot prevent herself from foraging through the wreckage of New Orleans for a bargain.

I have been beset by phone calls at all hours of the day and night from the Cornwalls. I am really finding my world renowned patience being stretched. “Cams, ducky”, I tell her, not for the 12th time, “this is one of the few occasions where you will be in the position of dining with someone thicker than you. Take advantage of it. Even if Chaz starts chatting to the broccoli, it is a dead cert that President Fuckwit will do something even more bizarre. Relax and do what the hell you like. Put on your silly voice and pretend to be an upper class thicko.”

I wonder if my loyal readers can provide me with some information.

What is the style of speech affected by a substantial number of young ladies between the ages of 12 and 30 that makes everything that they say sound as if they are complaining? It seems to be gaining in popularity, and accompanied by an insistence to communicate every detail about everything, no matter how bollock-numbingly boring.

What is the name for those parts of speech that superfluously qualify verbs, as in “phone up”, “print out”, “fill out/ fill in/ fill up a form”?