Unless you have a first in PPE from Oxford, you will probably not understand this.

Each year on 23rd April, it seems that I am obliged, in the face of continued diarrhoea in the media, to make clear the following carefully argued and philosophical points.

In general, I have to confess to be very rarely afflicted by boredom. I exercise what freedom of choice that I have in order to avoid being in situations that provide no interest, and have very seldom found myself short of things to do. Indeed, I am so blessed in this regard, that God, in His infinite compassion, has provided me with a wife, and I know that she is ever vigilant and has a fairly extensive list of things that she believes I could be doing to counteract boredom. The only difficulty in all of this is in persuading her that the things on her list are significantly less interesting that those on my already full catalogue of projects.

I therefore struggle to understand how my friends in the scientific community manage to invent new and arcane ways to spend their time, rather than tackling the important issues facing our race such as poverty, pollution and Mitt Romney.

The remainder of this article is concerned, to some extent, with Thingy. Those of you with an immature viewpoint should not proceed further, I am not here to titillate. (Continues to write in the forlorn expectation that there is an audience left).

I do sometimes struggle to find a subject with which to entertain my readers (aMToNW), and thankfully my friends at LiveScience.com are usually on hand to provide evidence that this is indeed Kali Yuga, and as Valmiki noted in the Ramayana, “There’s nowt so queer as folk”.

Some deluded bastard has decided to investigate colour preference, specifically in the matter of female genitalia. I will pause for a moment while you read that again.

The researchers first needed some similar, non-pornographic pictures of female genitals, a task that was "quite difficult," Johns said. Finally, they found a website set up so that women could anonymously submit photographs of their vulvas as part of a project meant to educate women on the diversity of genitals and improve self-esteem. The researchers picked four similarly angled photos and retouched each of them into pale pink, light pink, dark pink and red.

(Have you had your vulva retouched, missus?)

I have never, in my existence, known a woman daft enough to fall for that. There have been some women of my acquaintance with a fairly open attitude who wouldn't mind shagging anyone, either because of their kindness or their needs, but any woman gullible enough to believe a man telling her that they wanted intimate photographs for scientific research is a danger to herself and in need of severe protection.

There is no mention, at any stage, of any of these researchers questioning the usefulness of their project.  If you have dipped into this little corner of the internet previously, you will have gathered that I am not of a typically scientific disposition. Indeed, much of my experience of boredom is centred on the hours I spent in chemistry, biology and physics lessons at school. So distorted was my experience of time during physics in particular that, perversely, I could have developed an acute interest in the subject and gone on to win a Nobel Prize by explaining how several lifetimes seemed to pass in the time it took Mr Sutton to say “magnetism”. I cannot, therefore, empathise with these people, and remain perplexed by their behaviour.

The researchers then asked 40 heterosexual men to look at all 16 images in random order and rank them on a 0-to-100 scale of attractiveness. The results showed that instead of preferring red, the men actually showed the least preference for red vulvas.

Yes, they asked heterosexual men to show a preference for colour. There may be some heterosexual men who use words such as “fuschia” or “peach” when asked to name a colour, and there may even be a few who can remember the colour of their living room wall, but most of us, and I am of that persuasion, couldn’t give a flying toss.

Even if we did have a preference, how exactly would we choose a suitable mate? After a couple of chaste and successful dates does anyone believe that it would be appropriate to hand your companion a Dulux colour chart and ask her to circle the item most closely resembling the shade of her naughty bits? “Sorry, dear you’ve picked ‘Sumptuous Plum’ whereas I am a guy who prefers ‘Raspberry Bellini’, do you have a sister?” And yes, those are colours from the Dulux chart FFS. “Before I nip down to Boots and buy a couple of gross of condoms, would you mind if I took a quick shufty round your pubes to see whether it’s worth the effort?”

May cause offence to excrement

In this ever-changing world, it is gratifying to see that the Torygraph maintains the traditions that have made it the watchword for bigotry and mendacity for longer than any of us can remember.

This sub-heading from their website is from today, not 1876:

“Immigration has made it harder than ever for parents to secure a place at a good primary school.”

Ignoring the fact that most parents, apart from Torygraph readers, do not need to be at primary school, it is nice to know that irrelevant differences between we citizens of the world will always be pointed out by the despicable Barclay brothers and their anus sucking lackeys.

They go on to highlight their story with this well-chosen photograph. 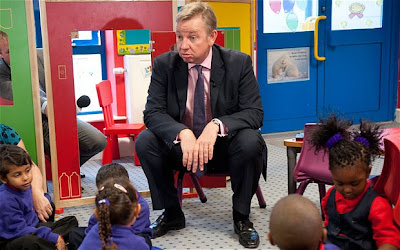 It is that poor white boy I feel so sorry for, obviously having to wait until he is almost pubescent before being able to attend kindergarten.

“Mind you”, said his mummy, “he is dumber than a sack of turds.”

Fuel for your bunsen burner

I am delighted to report that two stories from the Torygraph science section have attracted my attention today, my having been concerned for some time that scientists were running out of silly things to write about.

I could not be bothered to consider all of the detail – I am fearful of having my brain contaminated by these ramblings, but the essence is that whereas the larger dinosaurs became extinct after some catastrophic global event – a meteor hitting the earth, a Tory by-election victory, or the retirement of Sachin Tendulkar’s gt gt grandfather – the smaller ones failed to compete due to the relative size of their bodies to that of their eggs. Or some such bollocks.

Therefore, dinosaur junior’s health was threatened by being too small, whereas the same scientists would have you believe that our own young’s health is being endangered by obesity. Which one is it? And hurry up with your answer, I need to know whether to have an extra slice of toast for breakfast.

The second article, which I barely read at all, begins with the assertion that “Alcohol sharpens the mind”. It is a many a year since I imbibed intoxicants, so you will have to forgive my dull brain. Here I was under the impression that a few pints of Watney’s Red Barrel opened the gateway to fluency in speaking crap. I shall now make a habit of calling in at “The Twat’s Head” on my way home from work, downing six pints of mild, and then entertaining you, after all you are my best mate, with my newly found wisdom. I shall probably start with an essay on how marijuana aids the decision making process.
at 4/18/2012 08:33:00 am 13 comments:

In which Scurra yet again expands the boundaries of taste.

Last week it was Slimy Dave pressing for better relations with Burma. By that he meant licence to sell weapons to another oppressive regime, which is fine because they don't have much oil or anything.


I am tired of being in opposition, and have realised I must be wrong. I am looking for an opportunity to join the entrepreneurial culture. I shall be applying for a licence to open a slavery business in Henley on Thames. If I can  persuade the government that there is some good money to be made, I am sure that they will put aside any minor concerns about ethics. So, be on the lookout for any neighbours or friends who are young and strong (preferably) or maybe who just irritate the shit out of you. They don't have to be black, but as those people have it in their blood, I will be offering better rates. I will be round in my van in a few weeks to pick them up.
at 4/17/2012 08:25:00 am 20 comments: