Scientific discoveries of the decade. Chapter 1

The first contestant up to the mark is Colin Blakemore - Professor of Neuroscience at the Universities of Oxford and Warwick.

He nominates the breakthrough in the human genome project (pause while Rog makes joke about porcelain or plastic garden ornaments in form of small bearded men).

He says it is jolly important, although nothing has come of it yet. It probably will though, as it is ever so expensive. He predicts that “amazing new technologies will start to transform our understanding of how our bodies develop, work and go wrong.”

I predict that amazing new technologies will develop, seldom work and go wrong at enormous cost. Like my pals trying to understand the atom, the dna researchers will devise a way to spend a few billion quid, probably on some device to hurtle poor or dumb people into each other at almost the speed of light to see what results. More poxy scientists would be my guess.

Thank heavens for the Torygraph, inspiration for so many finely constructed essays in this blog. The following news items attracted my attention.
****
A DJ in Birmingham has lost his job after cutting off the queen’s speech at Christmas, saying it was boring, putting on a record called “Last Christmas” by a modern beat combo called “Wham” and announcing “from one queen to another”. I applaud this action, it may seem harsh to some, but anyone playing christmas songs in public should be sacked. I shall seek out his employers and offer my services. I have exciting ideas to enliven public broadcasting, including a week devoted to playing the complete clarinet concertos of Carl Stamitz. Helpfully, the Torygraph published a picture of the queen. Most of its readers will have assumed that Ann is still on the throne.
****
There is a report that the extra curricular activities of a well known golfer have cost the shareholders of his various sponsors $12 billion dollars. Good. Capitalist bastards. I trust that they are not so hard up that they face starvation. Having skinny targets for the firing squads when the revolution comes will be so tiresome.
****
A psychologist has put forward the theory that male infidelity can help a marriage. It would be cruel to suggest that judging by her photograph she is just desperate for a shag, and so I won’t do that. I will, however, run the risk of ignoring her advice and persevere by trying to keep Mrs S happy by being the kind of husband of whom she can be proud. I will not allow my dispensing of wisdom to the masses to be compromised by being distracted by sundry sausage hiding – I have neither the time nor energy. No doubt there will be some people distressed by my lack of availability. May I suggest that you avail yourselves of the services of the golfer mentioned earlier? He seems to have the time on his hands, and by – (insert sordid golfing pun here) – you will be helping to bring about the downfall of capitalism.
****
They have published numbers 11 to 25 (the rest tomorrow, I am so excited I could piss) of the “Britons of the Year”. I have heard of some of these people, and dare say that some of them may be loved by their families. Let me just take issue with their choice of Stephen Wolfram who, among other daft achievements, developed “the best-selling software system Mathematica, which has allowed millions of users to turn their computers into incredibly sophisticated calculating machines”. Yes, that is what we use our computers for, isn’t it? You won’t catch us wasting time by looking for obscure news stories, making jokes about tits or reading Dave’s blog, will you?
****
There is a further section on scientific discoveries of the year. I am virtually orgasmic with anticipation and almost certainly will be reporting on this in due course.
****
What of my review of the year? Well, there was that news story, that quite nice song, one or two good things on the electric television, a sporting achievement or two of note. Will that do?
at 12/30/2009 07:50:00 am 18 comments:

Some of you may take solace from the report in today’s Torygraph, which shows that our brethren in the scientific community do not use the celebrations as an excuse to take rest from their important research. The report says:
Prof Roger Wotton, from University College London, found that flight would be impossible for angels portrayed with arms and bird-like feathered wings
“Even a cursory examination of the evidence in representational arts shows that angels and cherubs cannot take off and cannot use powered flight,” said Prof Wotton. “And even if they used gliding flight, they would need to be exposed to very high wind velocities at take off – such high winds that they would be blown away and have no need for wings”
“Fuck him”, said a clearly tired and emotional archangel Raphael, when tracked down to the Elohim and Otter public house, just outside Ipswich. “Tell the twat that reindeer can’t fly either, so that’s bollocksed up his Christmas, hasn’t it? Teach him to be a smartarse.” Raphael, clearly unwisely having begun his festive celebrations a tad early was then led away by two members of the Suffolk constabulary. “This’ll be three points on your flying license, my son”, quipped one of them.
Later the European Confederation of Cherubim, Seraphim and Allied Heavenly Aviators issued the following statement. “Professor Wootton is clearly talking out of his arse, which is ironic as his research has shown that this is as unfeasible as angels being able to fly. It is time that members of the scientific community desisted from trying to second guess the mysterious workings of the Almighty, after all, He could beat them in a fight any day. I expect that the Angel Malik is preparing to welcome Rog in the near future.”
at 12/22/2009 11:04:00 am 21 comments:

Keep the noise down out there, please

As the author of this little diary seems to be too idle to write anything, may I introduce you to my dear friend Max? Please pay him a visit, remembering that we are not at home to Mrs Rude or any of her friends. I have even started a limerick in his latest post, so those of you too shy to introduce yourselves will not be at a loss to contribute.
at 12/17/2009 03:11:00 pm 7 comments:

My friends at the Torygraph report that "Monkey alarm calls provide clues to origins of human language". Nice to see TCM speculating about something and spending slightly less money in doing so. Here is what they have found being communicated.

FFS! Can't a chap take a shit without some twat eavesdropping?

Yes, it is a big fucking nose, but I have developed it over hundreds of thousands of years to help me cope with my environment - sticking it in other people's business is not the thing for which I use it. Now sod off.

Yo! George! Give him your David Bowie impression! See if the smartarsed git can make sense out of that.

One step closer, mofo, and you'll be investigating the origins of getting a microphone out of your ass.

Lend us ten bob until next Tuesday, please 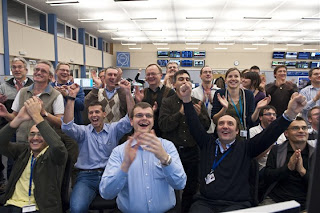 Scientists at Cern show their delight at breaking a new record. The LHC has been officially recognised by Guinness World Records as "The biggest fucking waste of money ever, and then some!".
The project now outstrips all the previous occupiers of the record, having outspent:
at 12/10/2009 02:39:00 pm 12 comments:

For those of you who think that because I sometimes cross the boundaries of iconoclasm that I am therefore without a religious dimension, may I direct you to this gentleman who seems to have a view of the nature of the Creator which concurs with mine.
at 12/03/2009 02:03:00 pm 19 comments:

A gentleman whose surname will not be unfamiliar to some of you has entered on an interesting project. Please get over there and lend him your support.
at 12/01/2009 04:06:00 pm 6 comments:

Get down with this

My dear friend I,LTV has posted some Sibelius over on her site, and confesses to have been humming it.
If you prefer something older, let's hear it for Franky.