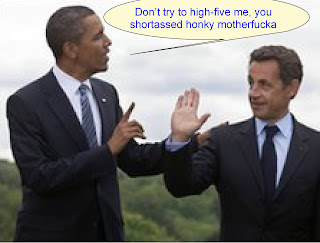 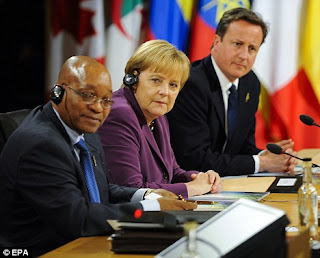 Dave did his best not to look silly. He had forgotten to bring his earphones. Meanwhile, the others tried not to giggle while Barack told the story about the corgi and the Moldovan Ambassador. 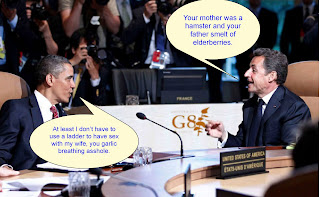 Dave was a little concerned. He felt sure that sure that Barack was whispering about "British", "oil", "water" and wondered whether he could outsprint Harper and Merkel. 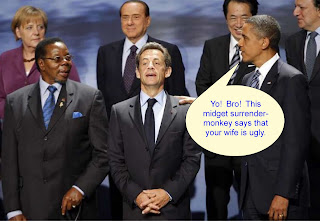 Barack's little joke had worked better than he could have hoped; he had waved goodbye to Frau Merkel, while getting the others to give her the forbidden salute.
at 6/27/2010 12:04:00 am 10 comments:

George was not very happy.

He had been sitting at his desk for 23 and a half minutes, and even though he had told Kylie that he should not be disturbed, he hoped that the telephone would ring, or that Kylie would bring him some bourbon biscuits and one of those exotic coffee thingies that came out of the machine that he could never operate without his tie getting caught up or spilling cinnamon powder down his trousers.

He added a fourth underline to the word “Budget” that was on his notepad.

This reminded George of his days at school when he had sat at the back of Madame Thierry-Henry’s class and got very depressed while all the other boys were writing and he couldn’t even remember whether his vacances were male or female.

He knew that whatever he wrote in his budget would not be popular.

He knew that whatever he wrote in his budget would be crossed out by Dave and replaced by something that his new friend Dan wrote.

Even when George thought that he was being very witty someone or other told him that he was wrong. John Bercow, who George seemed to remember had once been on his side, had had the temerity to tell him off. George had thought that saying “And the same to you with knobs on!” was a pretty good riposte to that oik Alistair Darling. Who did Bercow think he was, anyway? George was Chancellor, and Bercow didn’t even get a vote any more.

Eventually George wrote:
Sell the Treasury.
Send Dan out to get a paper round. Morning and evening.
Put a tax on bingo winnings, fish and chips and Coronation Street.
Sell the BBC to Mr Murdoch.
Make John Bercow clean the toilets in parliament, and sack all of the cleaners.
Will this do? 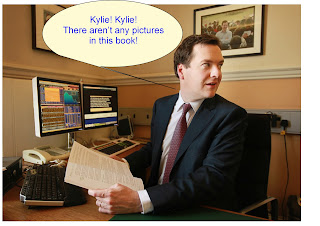 I was in receipt of an email today from someone who shares my name, and had changed their email address. However, they appear to have given all of their contacts my email address.
I have had several interesting (from my point of view) exchanges today.
(I should clarify that when I say they share my name, I mean that they have the same name as me. We do not actually take it in turns to own the name. That would be silly.)
This evening I received a message from dear old Carolyn, thus:
Hi,
Just wanted to confirm your plans for the 4th.
Still coming to see Jerry on the Fri. before 4th and then coming to beach house?
Do you know the way? We have new 73/74 hwy open now. Let me know what your plans are. What time to expect you.

Love you and looking forward to seeing all of you.
I replied:
Hi!
Who are you?
My plans for the 4th what?
For the 4th anniversary of Margaret Thatcher's death my plans are to dance on her grave, possibly a tap dance, but that all depends on the weather and how much longer she can hold on for.
For the 4th course of dinner tomorrow, I will probably have some of the date slice that my wife made at the weekend.
For the 4th round of the T20 cricket competition, I rather fancy Durham to beat Sussex.
You really should learn to be more specific.
I haven't seen Jerry for ages. She started to campaign on behalf of those with erectile dysfunction, and I took that as a personal slight. Whatever problems she had with Jagger should not reflect on the rest of us.
I would be happy to come to the beach house, provided that you can assure me there will be no sand, due to my allergy.
My plans are to live a happy, fulfilled and utilitarian life, and to persecute those people who are careless with the spelling of email addresses.
See all of me? I am overweight, but not obese. Or are you suggesting something more intimate? If you do manage to see all of me, I shall probably be blushing all over, you saucy young thing.
love and peace
at 6/15/2010 11:01:00 pm 15 comments: 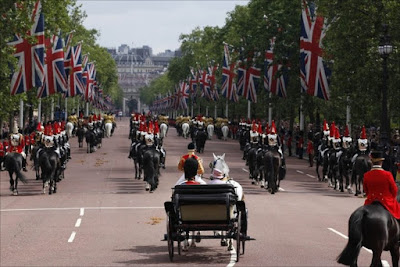 Liz preferred to celebrate her official birthday with a low-key ride through the locality. 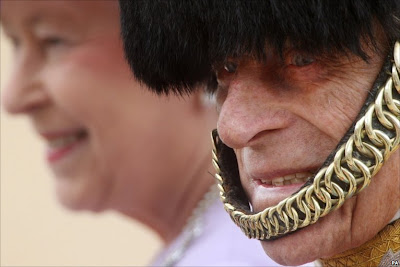 Once again, Philip managed to struggle free from his gag, and was soon regaling passers by with his views on immigration, capital punishment and shirt-lifters 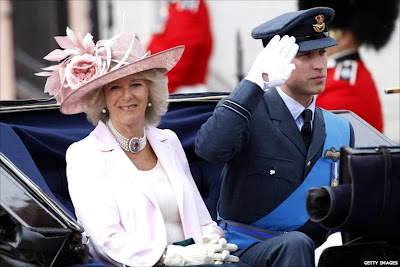 Bill tried very hard to screen the more graphic images of the day. 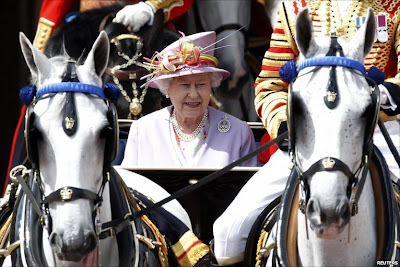 Once again, Charles only came seventh in the "Spot the odd one out" competition. 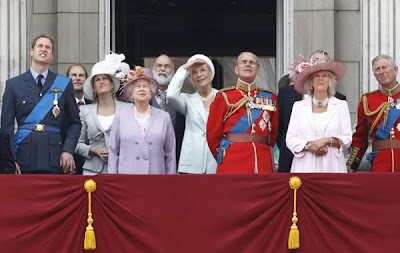 The family gathered to witness the "shoot a pauper out of a cannon" event. 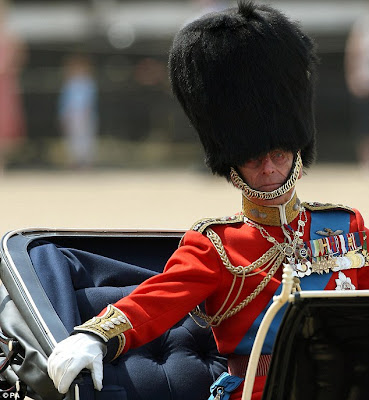 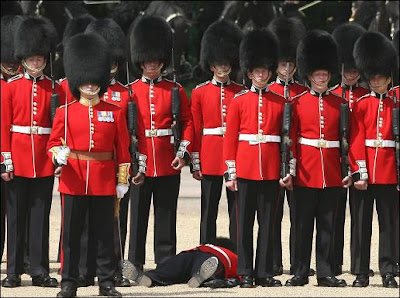 Some could hardly contain their excitement. 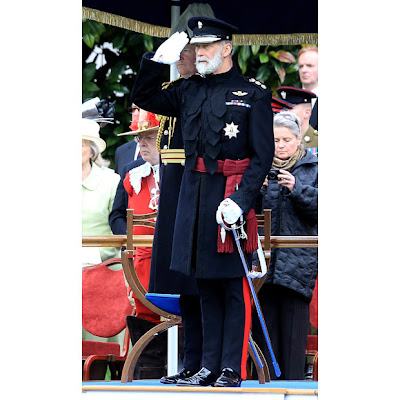 Mike tried to scare Liz by dressing up as her granddad and calling her a silly bugger. 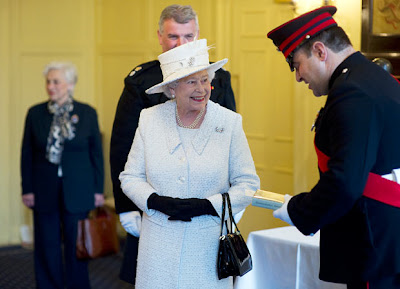 Colonel Siddons was expecting the George Cross, but decided not to make a fuss when he got a copy of "Corgi breeding for beginners" instead. 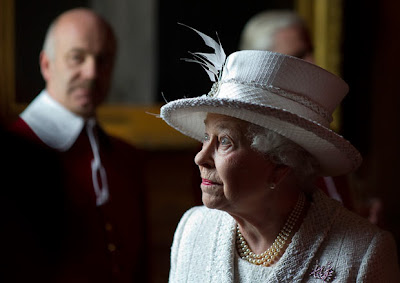 This year it fell to a Mrs Hampton from Yeovil to perform the "goose the monarch" ceremony. 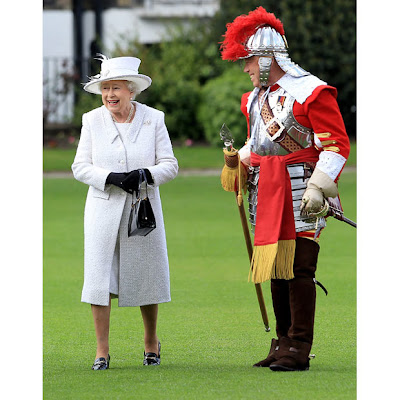 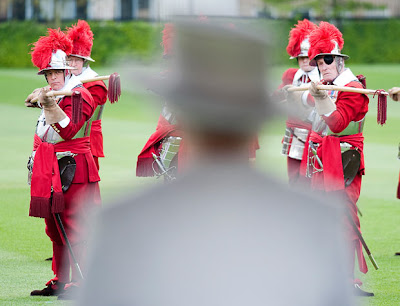 Mr Faversham had always realised that exclaiming "Hey, George, what's this?" had been a major error. 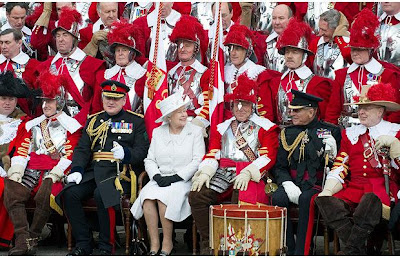 "They'll never spot us amongst this lot". 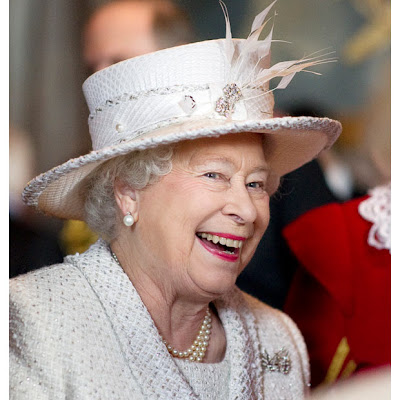 Liz was looking forward to the article posted by her loyal subject, Mr Scurra, on his internet diary, which would form the basis of the definitive historical archive.
at 6/13/2010 09:48:00 am 12 comments: