Send them back to India

Support these idiots!
Who knows? Maybe if you raise enough cash they might not come back.
For those of you suffering from irony deprivation syndrome, I should explain that some of these people are in my extended family. I can't afford to give them much money, but those of you wealthy enough to spend enough time twatting about on the internet to find this page may be able to spare ten bob.
at 3/26/2010 12:50:00 pm 11 comments:

Countdown to the Royal Divorce part 25

Astute readers (pls to avoid oxymorons. Ed.) will have noticed that the princess royal, or “bouncy tits” as her equestrian friends know her, does not appear as often in my journal as other members of the SC&G clan. This is not because of any particular frostiness in our relationship, but due to her seldom venturing indoors during the hours of daylight, apart from the occasional gallop (on horseback, of course) through the dining room at Sandringham or Windsor to grab a scone or flask of chicken noodle soup. (She only does this to annoy Philip, and has perfected a way of squeezing the stomach of a mare so that it passes wind immediately. Unlike her siblings, she has never been intimidated by Old Marbleless, as she wittily calls him.) She seldom has time to chat on the telephone, and as I equate equestrian activities with entertainment for the brain dead, we seldom communicate.
I was not surprised, however, to find her on the telephone this week. I do keep abreast of international news as I find that it sometimes gives a clue as to what these people are talking about – not a skill acquired easily, I can tell you.
For those of you, and you only have yourselves to blame, who do not keep themselves up to date with the “Auckland Advertiser”, I can report that a young lady with the unlikely name of Denise L'Estrange-Corbet (real name Mavis Dawkins) was reported to have described Mrs Lawrence as “as boring as fucking bat shit”. No reports that I can find define whether she used that ubiquitous and unnecessary expletive as a verb or adjective. I am not particularly troubled by this gap in my vast knowledge, but feel it would give some insight into the psychiatric map of Ms L’Estrange-Corbet. I also feel that the comparison was a tad unfair. Those who saw the excellent episode in the Attenborough comedies where the hero met a huge pile of bat shit would have been far more enthralled than had they been called upon to converse with a member of the house of Windsor.
Without pausing to ask about my health (I have been a little under the weather these few days with a seasonal cold), Anne launched in to a florid description of the event. “For the love of buggery”, she began, “I travelled right the way round the naffing world to one of the most anachronistic cities on the planet”, she is virtually unique in the family for having mastered the art of the use of multi-syllabic words, “and even find time to attend a ‘Save the Children’ fundraiser. You know what they’re like, don’t you? Full of well-intentioned but very dull and dim people.”
“Just like home from home then”, I interjected.
“Apart from the ‘well-intentioned’ bit” we both said in harmony.
“Any road up”, she continued, determined not to be put off her stride, “I politely make my way round the room, and eventually find myself face to face with this ghastly wench who looks like a knickerbocker glory with acne, and all she wants to talk about are the piss-poor clothes that she designs. So, as I do on these occasions, I affect not to understand her accent. I ask her to repeat everything that she says, and then reply very slowly in the same way that I talk to my horses, or used to talk to Mark, and hope that she will shut the buggery up. It’s at times like these that I miss daddy. He would have said something witty, such as “are you wearing those clothes to win a bet?” or “why don’t you shut your poxy gob”, but I am always too drained. Eventually I just ran out of energy altogether, and fell back on asking her if she had come far in reply to everything she said. After that the twenty minutes I spent chatting to the transgender nun who had been a flanker for the All Blacks about his, her or its latest project – something to do with recycling – seemed like the most interesting conversation I had ever had.”
at 3/24/2010 08:00:00 am 9 comments:

I am delighted to read the report in the Torygraph this morning on the research of this gentleman, clearly in line for the TCM of the year award. 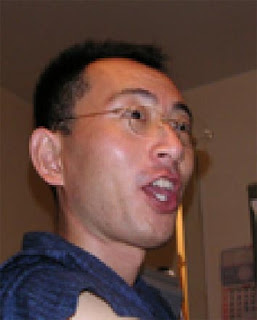 He has been researching into phobias, and has devised an injection that will cure people of phobias, including, no doubt, helping those folk who have a fear of needles.
You may be thinking that this is good news. Allow me to be the first to disabuse you of that misconception, by describing some of the research.

This centres on feeding lidocaine to goldfish.

“Early tests showed that goldfish given a dose of the drug lidocaine were unable to be scared.”

Bugger me! I never thought of that!

Old Masa (for it is he) decided to conduct an experiment in Pavlovian fashion (he performed “The Dying Swan” wearing diaphanous tights), by causing the poor goldfish to associate flashing lights with electric shocks, and demonstrated that they feared the lights even when there was no accompanying shock. He then administered said narcotic and broke the link.

We are then left with a bunch of drug addicted, epileptic, Japanese goldfish with third degree burns and totally lacking inbuilt danger warnings. If you see a very sorry looking member of the family Cyprinidae displaying bravado in the presence of a shark, you can feel justified in sending the bill for the funeral to Professor Yushida at the university of Hiroshima.

Would you welcome the recommendations of this man?

I look forward to his helping me to overcome my fear of one day being taken in by the absurd propositions of the scientific community.

I wish it had been Thatcher.

Today I am saddened, more than I expected to be, by the death of Michael Foot.
I am also angered, if not surprised, by the snide and unkind "tributes" paid to him. I expect nothing more of the Murdoch press, but cannot believe how ignorant the BBC is. Of the broadcast soundbites, only Ken Livingstone has had anything admirable to say. The ill-informed opinions of the lickspittle tory holders of office in the current Labour party are as vacuous as everything else they have to say. I have not read anything in the Mail or the Express, any more than I would examine the contents of the local sewer.
For those of you young enough never to have heard of socialism (and the rest of you as well) can I recommend you spend five minutes reading a fitting obituary in Tribune.
As a demonstration of irony, at a time when I am remembering a man who put fairness, tolerance and peace at the centre of his beliefs and practices, I shall be deleting dissenting comments.
at 3/03/2010 05:35:00 pm 19 comments:

Most of you will not have seen this story, even though The Leicester Mercury is always first with the big stories.
It has everything, summed up by being a successful struggle against adversity.
A young lad, (and lapsed blogger) fighting against a savage environment where vegetable-related cheating is a way of life, forges a career and gains international recognition.
I feel a strange empathy with Dickens in passing this on.
at 3/01/2010 08:22:00 am 11 comments: