I can hardly wait for the next one

The following contains a spoiler. I added this line too late for my dear friend Kaz, I am very sorry, Kaz. Didn't think anyone else watched it.

I owe all of you my apologies for my neglecting to keep you up to date with important events in our world, not least of which is the latest instalment of the hot man-on-man pornfest “Lewis”.

May I begin, in a somewhat anti-synchronatic manner, by pointing out, before I forget, how much I loathe the sodding music?

The latest episode is so far up its own fundament that if it were to have a mouth capable of being opened, then one would be able to see the parting in its hair protruding from the tonsil area.

There has been a return to the theme of making the victims part of the academic community. If this community is anything like that portrayed in this televisual entertainment then I suggest we fight for the release from prison of all of the guilty persons so far banged up, in order to continue their splendid crusade.

By the way, do you have any idea how much I abhor the bloody music?

This week we saw Art Malik poncing about for no reason to do with the plot, as far as I can see, in the role of a stereotypical academic. If you want to have a picture of what constitutes an Oxford academic according to the writers/directors, then just conjure up an image of Anthony Blanche, (perhaps a tad toned down) and you will have it.

Do you mind my telling you now how much I detest the arsing music?

The clever bit of casting this week was to have the father of the actor who plays Hathaway (Laurence Fox) appearing. Many of you will be familiar with the splendid career of Michael J Fox, although up until his appearance here I would never have thought him to be old enough to be Lazza’s dad. A very versatile actor – you would hardly recognise the star of “Family Ties” and “Spin City” behind the makeup, and one could almost, but not quite, forgive his dire attempt at impersonating Brian Sewell.

Lest it slips my mind, can I declare at this stage how much I can’t abide the pissing music?

There was also an appearance, again for no reason that I could detect other than to show off, by the lovely Selina Cadell. She breezed in, stole a couple of scenes (a much lesser actress could have done that), and then sodded off.

Thrown in to the damn silly plot was a load of intellectual farting about, featuring Lewis Carroll, C S Lewis and Sophocles, among others. To support the Carroll angle, one of the characters was called Alice. How bollocky clever is that? All of this gives young Hathaway a chance to demonstrate his erudition (missus), which only seems to endear him further to Lewis.

May I ask your leave to declare my hatred of the buggery music?

Anyway, were all this not enough to over egg even the mostly sickly pudding, Chief Superintendent Innocent (in a working class version of this series she would be called C.S. Bang-to-rights-you-toerag) has picked up on the sexual tension between her two colleagues, and decides to try to fix Lewis up with a friend of hers. If any of my gay friends are reading this, I hope that you realise that male homosexuals are only of that persuasion because they haven’t met the right girl yet.

Guess what? It turns out that the Super’s friend is actually the psychotic killer that they have been looking for all along. Gosh! What a turn up, eh?

I realise that there is a matter of etiquette that I have neglected in writing all of this, that is to point out, at the beginning, that it contains what is called a “spoiler”. However, I could not “spoil” this entertainment even if I were to vomit all over it and introduce a scene with princess Michael of Kent stripping.

Does anyone know where I can buy an LP of the music?

P.S. While I have been composing this, the lovely Mrs S has been watching “ER”. I grew bored with it years ago, but I just caught the following piece of dialogue:

If the first character had replied “It’s a very clean room where they cut people up, but that’s not important right now” I would buy every episode of every series on DVD and watch them all ten times.
at 3/26/2009 10:06:00 pm 11 comments:

It is incumbent on me to pass on to my readers (aMToNW) vital items of information that I discover. Indeed, I am still, despite my noted erudition, willing to learn.
Whilst reading a novel by that nice Mr Le Carré this evening, I found a reference to a time when there were Belisha beacons and no zebra crossings in the UK. I had always assumed that the two went together. This was, of course, before my time.
What is most peculiar is that I have read this book before, and must have forgotten this important historical fact. Fortunately, this ignorance has had no important damaging consequences.
My research indicates that the beacons predated the markings on the road by some 15 years.
When zebra crossings were first introduced, they were blue and yellow. I have no idea what they were called at that stage. As far as I can tell, there have been no recorded instances of blue and yellow members of the genus equus. I can think of no land mammals coloured blue. I am told by my friends at the Oxford dictionary that the word “zebra” is of Italian, Spanish or Portuguese  origin and means “wild ass”. Of course it would be inappropriate to have wildass crossings on our highways.
The Belisha beacon was named after the Minister of Transport who introduced them – Mr (later lord) Beacon. His full name was Mr Hore-Beacon. Wisely, the government of the day decided that it would not be fitting to have Hore crossings on the High Streets of this fine nation. That would have been silly.
So, now you have this vital data to hand. I hope that you will be able to remember it all.
I hope that this helps.
at 3/14/2009 11:57:00 pm 16 comments:

My dear friend ILTV has just posted an interesting little missive some of which concerns natural history.

Can you please advise me about a phenomenon that occurred this morning? It was annual breeding days for the local amphibians. I counted 15 frogs. I did this from a distance, as I am not voyeuristic by nature, and did not wish to disturb them. I am concerned, however, that if there were no more frogs present, then perhaps someone was without a partner. Do male frogs have more than one partner during their annual shag? I do hope so, or someone missed out, which would not be too bad, except that this happens only one day a year. Need I try to find the virgin and console them with some nice spiced spinach? How will I tell which one it is? The one not lying back smoking? They all look fairly lugubrious – I suppose that other frogs see some charm in them. I shall not be able to sleep peacefully until someone provides the answer.

Stop bothering me and try someone else

This will be next week's quote of the week. In Twat's Weekly

In celebration of being chosen as the New Statesman's political quote of the week, I thought that I would educate the many new readers sent here by that esteemed organ by sharing some insight into our culturally diverse society and providing some helpful analysis of the complex political choices that we face.
Then I thought, bollocks, I will follow the example of my dear friend Rog, who found this well of wisdom on his own and didn't need it to be approved by the New Statesman.
Rog has told a little story.
I have one also, although most of you will have heard mine.
The Lone Ranger and Tonto are out riding one day when Tonto dismounts (No, it's not that sort of story, Dave, you can use this one in your next sermon) and puts his ear to the ground.
"Buffalo come"
"How can you tell?"
"Face sticky".
Thank you. I am here all week.
at 3/07/2009 09:57:00 am 8 comments:

You know the one - Geoff Robinson's crooked mate 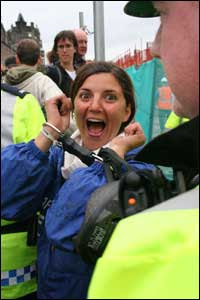 The young lady depicted above is the delightful Leila Deen. This is not a treatise about young ladies in handcuffs, or bondage, or any other pursuit best carried out in private. Those in search of such titillation may find other places on the electric internet that cater for their curiosity, although I find it hard to believe that there are many. This is a salute to the workings of democracy and Ms Deen’s attempts to pursue said workings.
This morning lovely Leila threw some green custard over Peter Mandelson. For those of you unfortunate enough not to be of the British persuasion may not know about old Pete. He is an unelected member of the government, currently Minister for being an odious little tit with no principles and devoid of standards, to give him his full title. He is also a member of the House of Lords – Lord Shitpisswankfuckcunt of Bollocks is his title there, I believe. I cannot, of course, condone the throwing of custard, unless it was entirely vegan; there are more effective methods of overthrowing the lickspittles who run this country, but most of them involve armed insurrection, and I don’t want to get hurt.
Leila is no stranger to political process, but does not get all of the publicity that she deserves, largely because her sympathies are often at odds with those of her majesty’s press.
This morning she was on the electric radio. “The only thing green about Mandelson is the slime coursing through his veins”, she said. I doubt whether this was a comment made up off the cuff (cuff – geddit?), but I was enchanted by it. It set the slime that is in my veins racing, and warmed the outer edges of my heart.
If any of you are friends with Leila, let her know that I would like to become her adoptive uncle. In case any of the perverts made it past the second paragraph, I should be clear that the relationship I have in mind involves no commitment whatever on either side, other than my right to say “that is my niece, you know” when she is hauled off to the Tower.
at 3/06/2009 09:06:00 am 13 comments:

To bottomless perdition, there to dwell

Just to give you something to do until I find time to write something, here is a little competition.
My dear friend Max has just described "Paradise Lost" as an "infernal portfolio of wank". And there were y'all thinking that today's students have no grasp of literary criticism. Can any of you provide a similar brief assessment of a major work of art?
I have never read any of Milton, so I cannot judge how accurate Max is. Similar ignorance will be the criterion by which I judge your efforts.
at 3/04/2009 03:24:00 pm 16 comments: