Just when I thought that there was an end of help that I could give to the world, some poor lost soul found their way here by means of typing the phrase “I want a intercourse in Oswestry” into Theodore and Evadne Google’s search engine.

Now, some of you might be inclined to deduce from this that our new friend is a resident of Oswestry. I would not rush to share that view. I think that it is more likely that Oswestry has some arcane quality that enhances the female orgasm, or induces some priapic effect that is not available in or We should not conclude that this person is deprived of carnal intimacy, but rather that their desire is specific to that particular auspicious geographical location.

Of course, as you all know, the most famous son of Oswestry is the Reverend Spooner. So perhaps it is in the repetition of some unintentional spoonerist innuendo that the delights of this quaint town are best revealed. The prize for the best suggestion is unlikely to manifest.

Not to be outdone by Plod, the mayor of New Orleans, according to my friends at CNN, has stated that the New Orleans election is in "uncharted waters".
I don't know whether this sort of black humour goes down well in the South (Adam, can you hear laughter from your left?)(and I doubt whether they would be allowed to use the word 'black', and it would have to be 'humor'), but I suspect he would get my vote.
at 4/22/2006 08:48:00 am 7 comments:

Police, looking into it, nothing to go on, and now...

In the wonderful tradition of constabulary verbal mangling, I am pleased to report the following that was broadcast by Inspector Knacker on Radio 5 just now.

“… they had a push-bike with them. If that rings any bells, please call us on …”

Countdown to the royal divorce - part 11

“And how long have you been doing that?”

“Ever since what we refer to as ‘The Snowdon Incident’”, I remind her.

She is very excited about her birthday.

“They’ll all have to sing ‘Happy Birthday’ as well as ‘God Save the Queen’,” she chortles, “then I might make them do it all over again”.

Think of Queeny from Blackadder, and you might get some sense of her mood this morning. She tells me of the little trick she has played on Sophie Wessex. She told her that it is the duty of the wife of the youngest son to personally reply to all the birthday cards – 28,000 at the last count. I keep quiet, I happen to know that even though SW was dumb enough to believe this, she used Word to produce the letters, and now there are 28,000 letters in the office waiting to be posted, all with the message “What do you do? Have you come far?” in them. She was even bright enough to have scanned her signature, although to the untutored eye the result reads, appropriately, “Soppy Wassock”.

“And what have you bought for me?” Liz again.

“You’ll find it under the tree.” It is cruel, but very difficult to resist.

Of course, I haven’t bought her a present. That all stopped years ago. I bought Charles a pair of fake ears for his 12th birthday, and the soft bastard hasn’t taken them off since.

To save my readers (AMToNW) the trouble of reading the sordid details in the latest attempt by my friends at the BBC to titillate the populace, I can give you some background to the headline “middle aged people still enjoy sex, especially in the west”.

The west in question refers to the western hemisphere. Although how a sphere can realistically be divided into east and west seems to be another example of the warped musings of our scientific friends. Silly sods.

This is very good news, unless you live in , as would be a bloody long way to go for a shag.

So, sorry New Zealanders, another night in front of the telly or the latest Charles Dickens novel for you. 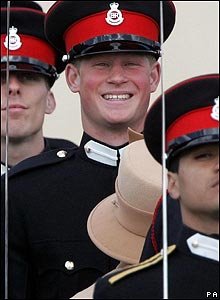 No, gran, you inspect the officers, not the privates. Let go now, please.

Countdown to the royal divorce - part 10

I seem to spend the larger part of my time trying to calm Camilla down, and keep her behaviour within the limits of decorum. This time she wants to do something outrageous for the St James Palace party for Liz’s 80th. I have to spend what seems like two hours explaining to her that even though this might be called a private function, the size of it means that news will leak out. “No, Cammy, you soft tart,” I say, somewhat wearily, “you do not want Michael Barrymore as the MC. Nor Bernard Manning, for that matter; and no, it is not a good idea to announce the engagement of princess Eugenie to Gary Glitter. Liz might find it funny, but the readers of the Mail will not.” She has one of her stroppy turns, which have become more frequent ever since her ‘elevation’ to the title of Mrs Chazza. “Stick to good old fashioned talentless, geriatric lickspittles like Cliff and Cilla,” I counsel, “and if you need a comedian, get Les Dennis, Phil finds him amusing, for some bizarre reason.”

William wants to buy his grandmother an ipod. “Just get her a small one, Bill, you daft sod,” I tell him, “how much fucking disk space do you need for ‘God Save the Queen’, even with all six verses”.

I don’t suppose I will manage to miss all of the festivities, these people become more dependent as the weeks pass by, and paying Leonardo Di Caprio to act as my look-alike is getting a tad expensive these days.

Today is the First Day of Summer

Email ThisBlogThis!Share to TwitterShare to FacebookShare to Pinterest
Here is an email I received today from someone I have never heard of or from before, and my reply. I feel that it is the appropriate tone with which to start the week.

I was just checking in and seeing how your decision process is going> i will be on Vacation in Vegas (HOPE I win the Jackpot) LOL from 4/12 -4/15. I will be back on Mon the 17th. I wanted to make sure that you did not any other questions. The Incentive of $13K ends the end of April. I look forward to hearing from you. Have a Good Easter if i don't tlak to you.
thanks,
Chris

Hello Chris
How nice to hear from you after all this time.
My decision process is a little slow. I cannot decide whether you are some elaborate hoaxer, a bloody spammer, or just an idiot who has typed the wrong email address into his mail box.
Anyway, that joke about winning the jackpot had me ROFL. or LMAO. or ESAD.
I did not any other questions. In fact, I did not any other gazelles either.
I can assure you that my Easter will be good if I don't talk (or tlak, if you prefer) to you.
love and peace

I would like to thank all of those kind people who have enquired about my health. I regret to inform you all that I am in fine fettle (Adam, that is a small settlement just off the coast of ), apart from a very irritating cough. I am sure that your prayers have been effective in producing a cure.

On the subject of prayers and miracles, TCM at LiveScience have an article wherein scientists are putting forth the opinion that Jesus did not walk on water. No, of course not, the froze over. Yes, Jesus was the Robin Cousins of his day. I will not get into the religious/theological aspect of whether this makes any bloody difference (I may even censor the comments if I get an attack by loonies). There is no point lampooning a minority religion when TCM leave themselves open to such ridicule. Why are scientists bothering to invent reasons for strange phenomena, when there are questions of great import waiting to be answered? How big was the big bang? And in comparison to what? For all we know there could have been much bigger bangs before it, but there was no bugger there to record them.

Also at LiveScience is a report that children in the are having sex before they learn to drive. Adam will confirm the veracity of this. I do not believe that the same is true in the . I did not have sex before my driving test, I merely shook hands with the examiner. I sense that he may have wanted to go further, I can tell by the way that he clenched my thigh during the three point turn, and shouted out “Shag me till my ears bleed” instead of hitting the dashboard, when testing my ability to do an emergency stop. You will know that I am not judgemental by nature, but I do tend to be in favour of one thing at a time. Call me old fashioned.

Following that is the news story that a teacher, also in the , had sex with a pupil 28 times in a week. I sometimes feel that opportunity passed me by. I went to a very liberal and progressive school, and feel that I had a well-rounded education, but this particular extra-curricular activity was never made available to me. I could make a list in order of preference of those teachers with whom 28 sexual adventures would not have been too arduous, but it would be unfair to them to name them here. I can say, to his relief as much as mine, that Mr Robson would have come fairly near the bottom of the list.

Finally, now that I appear to be on the mend, please divert your prayers and good wishes to the demented sod who found his way here by putting the phrase “nudist acetic acid” into a search engine.

Even more finally, note that Mr Gamon, who still is unable to decide whether to blog, has transferred his blog to his own website. Please visit and cheer him up, he seems a little confused. I hope you enjoy Geoff's comment as much as I did. (Should that be "as much as I" or "as much as I did"?).

It will not get any more final than this. I hope that those of you with modern electronic equipment enjoyed “The Wire”, the third season of which concluded on FX last night. Completely brilliant, despite my difficulty in following the language (those crazy northerners, eh, Adam?). I am pleased to note that a fourth series is planned.