I am sure that you will all be delighted to read in the Torygraph that some interminable busybody has been poking around among the dead, and claims to have found the bones of king Alfred in a box in Winchester. It is a little late to return them to him, but I am sure he is grateful for the attention.

Most of you will be familiar with Alf, although very few will have attended his funeral. I wish they would leave him in peace, along with future corpses in North Hampshire, amongst whom I may well number sometime in the next 50 years.

The Torygraph reports that the bones may be those of Alf’s son, Edward the Elder. Alf showed great perspicacity in bestowing this sobriquet onto his son. Many of our modern royals resemble shrubs, in appearance, intelligence and, one would like to think, in their contribution to the welfare of us all. Ted’s daughter married an illegal immigrant, one Sitric Caech (Norwegian for Citrus Cake), and thus the purity of the genetic line was ensured.

Alfred is portrayed as a great hero among the British. I am sure Michael Gove has a photograph of him on his desk. He was not, however, a great liberal reformer, and somewhat cruelly named one of his sons Ethel Weird.

Thank you. I am happy, and quite together, man.

This week, I did something that I have not done for a long time. But I don’t want to write about that, this is a family-friendly forum.

This week, I did something that I have not done for a long time. I bought a book and instead of putting it somewhere near the bottom of the pile of books awaiting my attention, I read it. The queue-jumping tome to which I allude is entitled “Shell Shocked”, and is the autobiography of Howard Kaylan. (Who he? Ed.)

One of my favourite songs of the 1960s was (and still is) “She’d Rather Be With Me”. I loved it the first time I heard it, and remember seeing the Turtles on Top of the Pops, in a film (that I cannot now find on the electric internet) that was full of joy and happiness. It is a really simple song, as most of the best pop music is. They had had an earlier hit in the UK – “Happy Together”, but “She Rather” did better in the UK, whereas “Happy Together” was their biggest hit in the USA.

Mark and Howard were first rate singers, and later appeared with Frank Zappa, and sang on lots of tracks by all sorts of rock bands. If you want to appreciate just how good Howard was, watch and listen to this, where the instrumental
sound track has been stripped. (Go on, watch it)

I went with some friends to see them with the Mothers of Invention in Liverpool in 1970. I can recall little of it, I suspect I may have been an unwitting victim, and inhaled the smoke from narcotic substances that may have been in use among certain less respectable members of the audience. Howard remembers my being there, because he was kind enough to reply to a message I sent him some time ago, and when I mentioned that I was the one with long hair and under the influence of drugs he confessed to having had a clear recollection of that.

Before I discuss the book specifically, I need to give it some context from my perspective. I seldom read biographies or autobiographies; my preference is for fiction. I have an iconoclastic view of most of those performers of the music that makes up my record collection. I am not overly interested in their lives and deeds, much less their opinions. I occasionally watch some programme or other on the electric television where the survivors of the music scene of my youth talk about, and usually overhype their fellow travellers, and such chat normally descends into reminiscences of people who were “really amazing”, of whom no one else has ever heard. On the whole, I am glad that I remained undiscovered. I was not, contrary to rumour, invited to replace Mick Taylor when he left the Stones. I did not shag Janis Joplin, nor appear on the cover of Sgt Pepper. From here, I don’t think anything other than the anonymous hippy scene that I found myself part of would have suited me. I had a really good time, and I am pleased with the path of my existence since then. 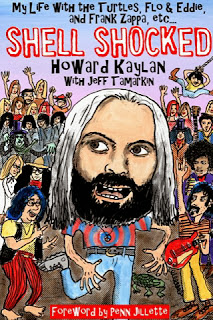 Anyway, the book begins with a stonking introduction by Penn Jillette, and Howard’s narrative begins with the sentence “I was snorting coke on Abraham Lincoln’s desk in the White House”.

‘Shell shocked’ follows a fairly standard plan. It is largely chronological, with much of the story concentrating on the period with the Turtles and the Mothers. It is not laden with deep insights, and that is clearly not the intention. It is free from malice, and captures some of the feeling of that time. There is little psychoanalysis and it is largely unjudgemental. If he is hard on anyone, it is on himself. It is full of anecdotes with plenty of reference to sex and drugs without any unnecessary embellishment.

So far it seems as if I am unenthusiastic, but I liked it immensely. In reading it the character of those guys who I first saw over 45 years ago having such a great time singing their song shines through to the end. I think what is so cool about it is that I get no sense of hype. There is a story to be told, and those who were there will want to read it, and those of us who weren’t there but observed it will probably rejoice in seeing the protagonist survive all of the adventures and remain the same guy that started off, just wanting to play music, have a good time and be a drug crazed hippy. I feel as though I have read a story written by a friend – I think to have produced a story like that is quite an achievement.

I hope some of you read the book and, if you do, I hope you enjoy it as much as I did.

You can buy it here: