In the very temple of delight

I am often asked by readers here (aMToNW) where my writing career began, and who were my influences.

A man who wrote such utter sentimental twaddle that I was forced to abandon my usual surly teenage response to being asked to write a criticism – usually variations on a theme of “boring” – and write a parody.

It began something like “I remember, as a boy, running home through the village beating up old ladies, the way that boys do.” I may even have taken care to avoid repetition of the word “boy”, but I suspect not, as I only got an A-.

Inspired by this, I was driven to contribute to our school underground magazine. The magazine was called “Juggle”, due to this monstrosity that some vandal had glued to the front of the school. 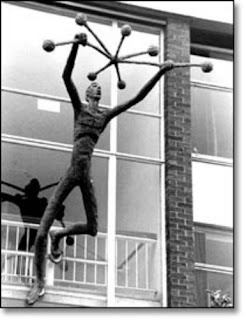 The culprit was an “artist” (artist in the sense that Laurie Lee was a writer) called Peter Peri. A working title for our magazine was hence “Perineum”, but this was later abandoned as being a little too close to – you know what I mean. It was here that I honed my style of lazy juvenile trash, and I have clung to that style these forty years. I have not become more sophisticated, intelligent nor wise in my writings. Of this achievement I am very proud.

One of the targets of in almost every issue of “Juggle” was Keats - always referred to as “The poet Keats”. I do not know why this form was compulsory, I suspect it derived from observation of the linguistic quirks of one of the English teachers.

I have never understood why Keats is so admired. He had little to say, (and when I say 'little' I am erring on the side of generosity) and said it in a dull and verbose way.

“A thing of beauty is a joy forever”. No it fucking ain’t. It will crumble and return to dust like all things, including us. Impermanence is our condition, and a concept with which we never seem to be able to come to terms. Even I, sitting here in this perfectly honed and glorious frame, the epitome of evolution, if you will, will one day be fertiliser for a beech tree or chrysanthemum. So, bollocks to the poet Keats.

The poet Keats? Boring in 1967 and still boring today. Will that do, Miss Turner?

As a schoolboy I was likewise intrigued as to why, unlike other poets, Keats - and for that matter Shelley - was always preceeded by the epithet "the poet".
I think I settled on the explanation that he was just shite (or should that be "odious" - fnaar, fnaar), so shite in fact that he was almost a total nonentity and so had to be distinguised from all the other Keats around at the time - you know, Keats the plumber, Keats the wholesale grocer, Keats the goat worrier.
I'm certain that everything he ever said to anyone was instantly followed by the lines "Come again, John?" or "You what?"
P.S. It would be a cheap shot unworthy of you to answer this comment with "Come again, Reg?" or "You what?"

As a schoolboy I couldn't give a toss why Keats had to have 'the poet' in front of his name. Anyone who was a poet was also a twat as far as I was concerned. In fact, the twat Keats would have been nearer the truth if you ask me.

I never got on with poetry, although like S. Milligna, I do like a bit of McGonagall.

With regard to Keats, in the manner of a Viz Top Tip (which seem to be very popular of late), piss pseudo-intellectuals off by insisting it's pronounced "Kates".

Keats was a c*nt,
Milton was a h*mo &
Shakespeare was w*nker.

There, can we trash American literature, now?

No Keats lovers then? ILTV partial to odes, perchance? Ziggi, do you think there is something lyrical about "mellow fruitfulness", or do you think it is a load of old toss, like everyone else?

Anthea Turner was your English teacher? Wasn't she a bit young?

Anyroad, I have been sent the William McGonagall "Gem of the Day" and it's a blinder. Kublah bloody Kahn? McGonagall didn't need base opiates to produce this masterpiece

You're such a bleeding iconoclast, Vicus.

But you're right about Laurie Lee. Anyone with such sunshiney memories of childhood MUST be repressing some serious shit.

can we swap a letter?

Had I the heavens’ embroidered cloths,
Enwrought with golden and silver light,
The blue and the dim and the dark cloths
Of night and light and the half-light,
I would spread the cloths under your feet:
But I, being poor, have only my dreams;

I have spread my dreams under your feet;
Tread softly because you tread on my dreams.

and I forgot to say that I developed a strong dislike for Laurie Lee when my little brother was cast - on the basis of his violin playing - to play Laurie as a young boy in Cider With Rosie. . .

I had to watch it every night for two weeks, since that was cheaper for my parents than them hiring a baby-sitter to look after me at home

jammy sod - she was divine!

Did he get to play doctors and nurses too? That would have been some school production.
And yes, you can produce any poet you like, and Bill Butler ain't bad. I was expecting you to defend the poet Keats though.

I used to work with Laurie Lee's son-in-law. Bloke called Damian, an illustrator. I don't think he knew who Lee was when he met his daughter. Marriage didn't last as far as I know.

Yes, come and meet the family - Dad will read from his latest installment of his autobiographical novels.
For 5 hours.
In the local accent.
Poor bastard never stood a chance.

Simon! Welcome home! Pull up a bollard and tell us all about your adventures.
God, how we have missed you!
In answer to your questions:
What's going on?
This overpopulated and over-polluted planet is spinning towards oblivion while the inhabitants continue to behave as if they were immortal. Accrington Stanley finished mid table. I think that just about covers everything.
How old are you now?
Just approaching puberty.
What's happening in London?
Haven't been there for a few days, but my guess is that there are loads of crazy fuckers dashing about as if what they were doing had some meaning or value.
In North East Hampshire, Jane Austen is still a virgin. (if you don't include electrical appliances)

(sorry to interrupt, but may I clarify something? yup! spot on. . . this crazy fucker has been dashing about imagining that what she does has some meaning and/or value!)(grovelling apologies)(I'll now go and look up some poetry, to make up for my pushy misdemeanour)

Cider With Rosie has what annoying people call the feelgood factor. In other words, not the sort of thing you want to read when you're a surly, miserable and alienated teenager.

Actually, I'm feeling pretty surly, miserable and alienated myself because it looks as if London is going to be lumbered with Boris ...

((phew!))
It would then seem that we here in the Colonies are quite fortunate to know nothing of Keats, Shelley or any other 'poet' for that matter.
In point of fact the closest that we ever get to poet, is Poe...then it goes straight to Popular Mechanics and on to the Q's.

Forget that nonsense, I see Boris has "won" London. Was there a tombola?